Infiniti donates more than US$ 1-million to charity

NGOupdate
on May 20, 2016
Email ThisBlogThis!Share to TwitterShare to FacebookShare to Pinterest 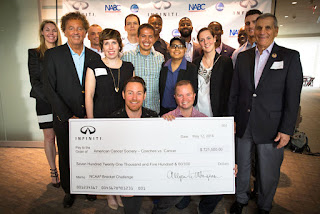 This year, Infiniti donated more than US$ 1-million to a variety of coaches' charities as part of the brand's ongoing corporate partnership with NCAA and the National Association of Basketball Coaches (NABC). Allyson Witherspoon, Director, Marketing Communications and Media, Infiniti USA, presented the checks to the winners at Infiniti Americas Headquarters in Tennessee.

"We are pleased that Infiniti has reaffirmed its support of NCAA student-athletes and higher education values with its five-year contract renewal as an NCAA corporate partner," said Mark Lewis, NCAA Executive Vice-President for Championships and Alliances.

Head Coach John Beilein and the University of Michigan Wolverines fans won the annual Infiniti Coaches' Charity Challenge, a first for the school. Beilein's chosen charity, the ChadTough Foundation, received a check for US$ 100,000. Infiniti donated another US$ 227,500 to various philanthropic organisations that were individually selected by the other NCAA Division I basketball coaches in the Infiniti Coaches' Charity Challenge.