NGOupdate
on June 01, 2015
Email ThisBlogThis!Share to TwitterShare to FacebookShare to Pinterest 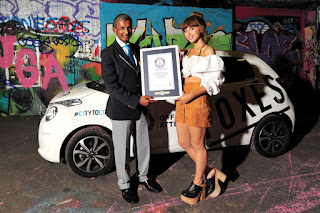 Foxes and Citroen have successfully completed a Guinness World Records title attempt for the 'most live concerts performed in 12 hours in different cities'. The title attempt took place with the goal of raising money for the hugely worthwhile cancer charity Trekstock.

The record-breaking series of gigs was completed at House of Vans in London.

The city to city  Guinness World Records title achievement saw Foxes perform seven live concerts at seven different locations in the UK in only 12 hours, with a New Citroen C1 used to travel between the venues. The concerts also included an exclusive debut performance of Foxes new single 'Body Talk', which is due to be released in the UK on July 24.

"It's been amazing to see this challenge through to the finishing line. It's been a long day, but Im so excited to be able to say that I'm now a  Guinness World Records title holder. I'd like to say a huge thanks to Citroen and my team for making this become a reality. After taking the New C1 from city to city, I'm more determined than ever to pass my driving test and get out on the open road," said Foxes.
Posted by NGOupdate at June 01, 2015