NGOupdate
on March 10, 2014
Email ThisBlogThis!Share to TwitterShare to FacebookShare to Pinterest 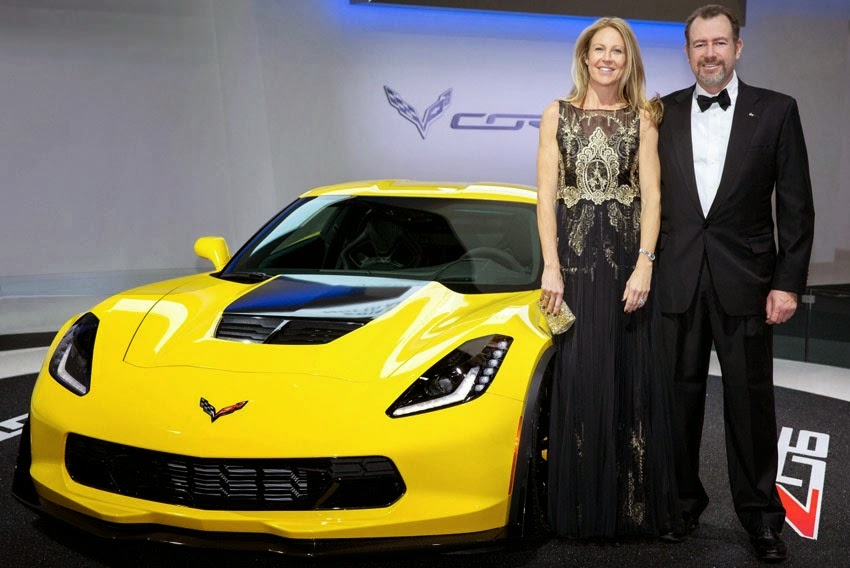 The first retail production 2015 Chevrolet Corvette Z06, the most track-capable Corvette in the brand's history, will be auctioned to benefit the Karmanos Cancer Institute. The Barrett-Jackson auction house will offer the supercar during its Collector Car Auction in Palm Beach, Fla., on April 12.

The auction extends General Motors' long-standing support of the Karmanos Cancer Institute, one of 41 National Cancer Institute-designated comprehensive cancer centers in the country, which last year raised US$ 1-million by auctioning the first 2014 Corvette Stingray Convertible at Barrett-Jackson.

This year, Chevrolet is donating the all-new Corvette Z06 in support of Karmanos Cancer Institute's 32nd Annual Dinner. All proceeds from the auction will go to the renovation of the Institute's infusion center, providing a more comfortable and soothing setting for patients to receive chemotherapy treatments.

GM President Dan Ammann and his wife, Pernilla, Chief Operating Officer of Mother New York, will chair the Annual Dinner on April 26, 2014 at the Fox Theatre. This is the fourth consecutive year that a member of GM senior leadership has chaired the event.

"Chevrolet's donation of the first 2015 Corvette Z06 produced is yet another way that we are showing our continued support of the Karmanos Cancer Institute," said Dan Ammann. "The funds raised from the auction will help further the exceptional patient care that Karmanos is known for in our community and across the country."

In honor of the Annual Dinner, the General Motors Foundation recently announced a US$ 400,000 grant to support the Institute's cancer research. The grant brought GM and the GM Foundation's support of the Institute to nearly US$ 7.3-million over the last 17 years.

"When it comes to corporate citizenship and philanthropy, General Motors and its employees set the example," said Gerold Bepler, M.D., Ph.D., President and CEO, Karmanos Cancer Institute. "Their generosity goes a long way toward improving the lives of cancer patients and supporting cancer research. Our heartfelt gratitude goes to GM, the GM Foundation, Chevrolet and Barrett-Jackson for their ongoing commitment to help end this disease."

Those unable to attend the Palm Beach Collector Car Auction may bid online. Since this is a charity sale, Barrett-Jackson will waive all buyer and seller fees.

The winning bidder will receive a letter of authenticity, as well as the ability to select the color of his or her 2015 Chevrolet Z06.
Posted by NGOupdate at March 10, 2014