NGOupdate
on September 27, 2015
Email ThisBlogThis!Share to TwitterShare to FacebookShare to Pinterest 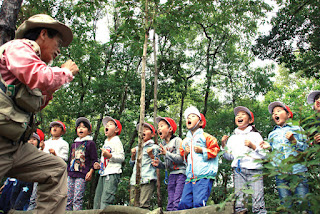 For more than 20 years, Toyota has been developing and maintaining a unique forestry project just a few kilometers from the factories and offices of its corporate headquarters. Known as the Forest of Toyota, the project is slated to receive an award for contributions to a green society from Japan's Organisation for Landscape and Urban Green Infrastructure.

In 1992, Toyota initiated the project on a 15-hectare company-owned plot, with the goal of cultivating a healthy forest area based on Japan's satoyama model of bio-diverse landscapes where humans interact with nature. The Forest of Toyota opened to the public in 1997, and since then has expanded to 45 hectares. It features areas thick with wildlife that are perfect for observing fauna and flora, as well as areas set aside for the conservation of rare creatures and plants. The site is maintained in such a way as to emphasize its natural topography and geographical features.

Hands-on educational programs began in 2001 and continue to this day, with children from local elementary schools taking part in courses taught by nature guides. Every year, around 7,000 school children participate in these activities, and the number of visitors topped 138,000 by April 2015.

Representatives from Toyota will receive an award for the project at a ceremony to be held on October 1 at Aichi Prefectural University. The awards, now in their third year, aim to promote corporate tree-planting initiatives and the creation of urban environments with abundant greenery and charm. The Organisation for Landscape and Urban Green Infrastructure recognises corporations which have outstanding records of environmental success in preserving biodiversity, and which have made significant contributions to regional communities through strong management of public-friendly green spaces.
Posted by NGOupdate at September 27, 2015