NGOupdate
on May 24, 2016
Email ThisBlogThis!Share to TwitterShare to FacebookShare to Pinterest 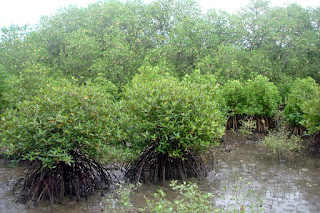 To coincide with the International Day for Biological Diversity, the United Nations sanctioned global day for the promotion of biodiversity issues, Apollo Tyres and Wildlife Trust of India (WTI) announced their partnership on a critical mangrove restoration project in the Kannur district of Kerala.

The Kannur Kandal Project – 'kandal' being the Malayalam word for mangroves – aims to ensure the survival of existing mangroves and increase the acreage of such habitats across Kannur, potentially making it a prototype for other coastal districts of Kerala and a model for the rest of the country.

Mangrove forests are unique ecosystems, extremely rich in biodiversity, growing along inter-tidal coastal habitats such as shorelines, estuaries and backwaters. They are both refuges and nurseries for a large variety of threatened terrestrial and aquatic species, and for people living in coastal communities they are an important source of fodder, medicines and firewood. They also act as barriers against cyclones and tsunamis (evidenced in their important role in reducing the impact of the 2004 Indian Ocean tsunami), prevent coastal erosion, and maintain inland water quality by preventing sea water intrusion.

However, mangrove forests have faced considerable destruction the world over, with less than half of the original acreage remaining. About half of that loss has occurred in the last 50 years, and a significant amount in just the last two decades, especially due to human population growth and intrusive development. (Data from Global Forest Watch, an online forest monitoring platform, shows that the world lost 192,000 hectares of mangroves between 2001 and 2012.)

Mangrove area in Kerala has also reduced drastically over the years, with only 1750 hectares of an estimated historical 70,000 hectares remaining. Conversion into coconut plantations or other agricultural land, aquaculture, unscientific water regulation, population pressures, real estate development, inadequate enforcement of laws, etc have all contributed towards mangrove destruction.

The actual site for Apollo Tyres-WTI's project will be in Kunhimangalam village in Kannur district, which is one of the largest mangrove villages of Kerala. The project will establish a hub, located in the natural ecosystem, for mangrove-based education, serving as an open air laboratory for research and promoting restoration through community and government participation. A mangrove nursery and community-based initiatives to enhance public awareness and reduce threats to mangroves are other aspects of the project. Particular efforts will be made to generate scientific interest about mangroves among the youth.

Land secured with the support of World Land Trust, an international NGO will serve as the nodal site for all conservation activities conducted by WTI and Apollo under this project.

"Biodiversity conservation is an important thrust area within our Environmental Sustainability initiative – HabitAt Apollo. We are happy to partner with Wildlife Trust of India on mangrove conservation, a project that has huge ecological significance. This association reflects our commitment towards bringing conservation issues to the forefront, raising awareness and creating positive impact," said Satish Sharma, President, Asia Pacific, Middle East & Africa (APMEA region), Apollo Tyres Ltd., on the commencement of the mangrove conservation project.

Vivek Menon, WTI's Executive Director & CEO, added, "The abuse and decline of our mangrove forests should be of particular concern to all of us. Primarily for the loss of their marvellous biodiversity, but also for their value as a natural buffer against climate change and its attendant adverse effects. I am extremely pleased, therefore, that we at the Wildlife Trust of India have partnered with Apollo Tyres to launch the Kannur Kandal Project. This is a crucial first step towards the securing and restoration of our mangrove forests; I trust that as the project unfolds it will serve as a model for Kerala and subsequently, the rest of coastal India."
Posted by NGOupdate at May 24, 2016