NGOupdate
on May 05, 2015
Email ThisBlogThis!Share to TwitterShare to FacebookShare to Pinterest 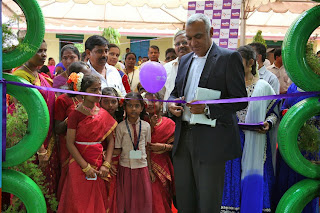 Apollo Tyres inaugurated two Tyre Playgrounds near Chennai, in the southern part of India. These playgrounds have been created using worn-out or end-of-life tyres (ELT) for the kids of Senakuppam and Vallakottai villages, just outside Chennai.

Satish Sharma, President, Asia Pacific, Middle East & Africa, Apollo Tyres Ltd. inaugurated the playgrounds, located inside the community schools, along with with the head of the local Panchayats and the School Headmasters.

"As per a research commissioned by us, very soon India will have 100-million+ end-of-life tyres every year, without proper mechanisms in place to recycle or dispose off these tyres. As a responsible company, we have been working towards tackling this issue of discarded tyres. From expanding our retreading footprint, to the launch of Go The Distance pitch in Old Trafford, UK, and now these play structures, all showcase ways we have been working towards the reuse or recycling of discarded tyres," said Sharma.

Each of these playgrounds has been created using nearly 200 radial tyres, under company's umbrella environment initiative, Habitat Apollo. Depending on the success of this pilot project of creating play structures using worn-out tyres, the company will look at replicating it at multiple locations across the country, with the villages around Apollo Tyres' manufacturing facilities, as the first targets. 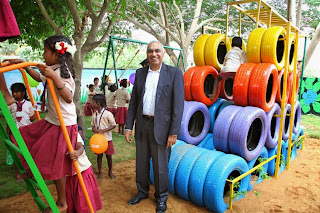 The two village schools in Senakuppam and Vallakottai were identified for the Tyre Playgrounds, as they lacked play structures. Structures like monkey-climb, swing and ropeway has been created using the worn-out tyres.

"Apart from making use of end-of-life tyres, these Go The Distance playgrounds also provides a platform for the children from these villages to improve upon their agility and activeness, while sensitising them on the concept of reuse and recycle," Sharma further added.
Posted by NGOupdate at May 05, 2015