Wayne gears up for charity challenge dressed as a giant nurse

NGOupdate
on March 11, 2015
Email ThisBlogThis!Share to TwitterShare to FacebookShare to Pinterest 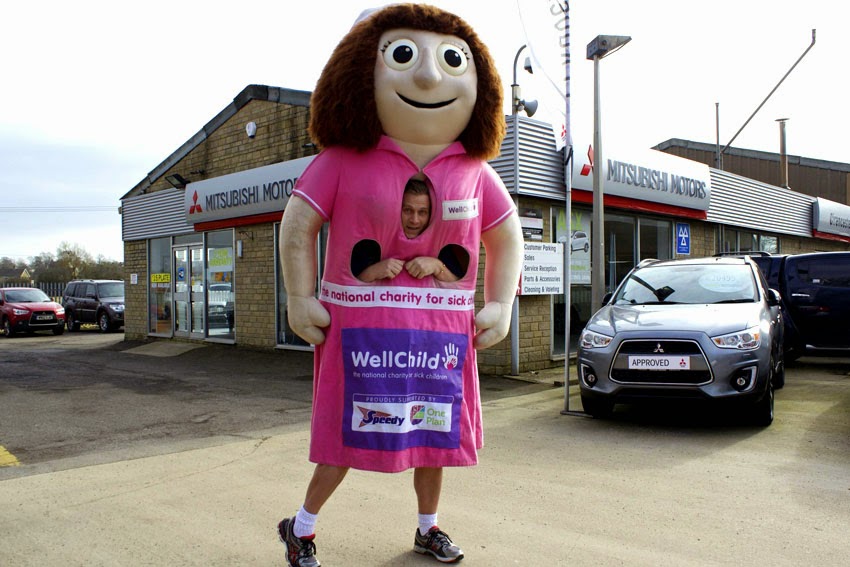 A member of staff at the Mitsubishi dealership in Cirencester is getting ready to run a half marathon for charity - dressed as an 11-ft tall, bright pink nurse.

Sales Team Leader Wayne Connolly, 41, will be raising money for WellChild, which helps seriously ill children and their families across the UK, when he takes on the Silverstone Half Marathon on March 15, 2015.

Not content with the challenge of running 13.1 miles, the dad-of-two decided to don the charity's outfit of Nessa the Nurse, which weighs 2.5-stone and stands 11-ft tall with him inside.

"I'm not a runner at all, I hate running, so training for this has been tough! The costume is really heavy and I've been getting some funny looks while I've been out training but I’m determined to keep it on for the entire 13.1 miles," said Wayne.

The half marathon is part of Wayne's training for when he takes on the London Marathon on April 26, 2015. He is aiming to raise at least £1,600 for WellChild from the two events.

"We're really pleased Wayne has decided to take on this challenge and raise vital funds for WellChild. Donations from people like Wayne enable us to invest more money in charitable programmes for seriously ill children, which is great news," said Colin Dyer, Chief Executive, WellChild.

WellChild provides essential practical and emotional support for seriously ill children, young people and those who care for them to ensure they receive the best possible quality of care. The patron of the charity is Prince Harry.
Posted by NGOupdate at March 11, 2015