NGOupdate
on May 12, 2015
Email ThisBlogThis!Share to TwitterShare to FacebookShare to Pinterest 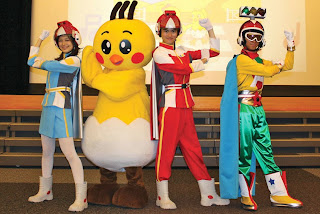 As communities grow and develop, traffic grows and develops in turn, thereby increasing the hazards and risks involved when pedestrians and automobiles interact. Toyota believes that proper traffic safety education is vital in avoiding injuries stemming from such accidents, and that such education should begin at an early age.

"Next year, in spring, a whole new generation of first-year elementary school students will begin walking to school. Our hope is that each student can safely walk to school with their parents confident that they will arrive without mishap. For over 40 years, Toyota has conducted this program as part of its social contribution regime aimed at enriching lives around the world," said President Akio Toyoda.

Since 1975, Toyota has held the annual Toyota Safety School event to teach fundamental traffic rules - such as proper pedestrian crossing etiquette - to children at kindergartens, nursery schools, and company day-care centers in and around Toyota City. This year will be Toyota's 41st year holding this event.

Toyota will offer its annual Toyota Safety School events to children in two locations in Japan. One location will be the Toyota Kaikan Exhibition Hall, where events will be held from mid-May to mid-July. The other location will be the Toyota Safety Education Center 'mobilitas' which makes its home at Fuji Speedway in Shizuoka Prefecture, with instances held first in May and then October.

Toyota believes that creating a society free of traffic casualties requires an integrated approach encompassing the development of ever-safer cars and technology, improvement of the traffic environment, and traffic safety education. For this reason, commitment to traffic safety has been reaffirmed year after year as a top priority and this traffic safety school is one of many efforts toward that end.
Posted by NGOupdate at May 12, 2015