NGOupdate
on January 29, 2015
Email ThisBlogThis!Share to TwitterShare to FacebookShare to Pinterest 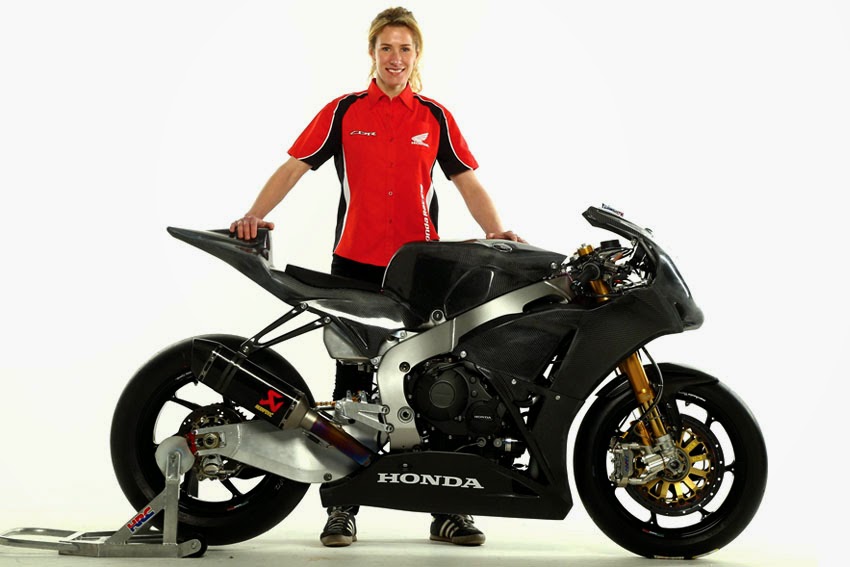 Honda (UK) has signed the fastest female on two-wheels to compete for its official team in the UK's premier motorcycle racing series - the British Superbike Championship. Cheshire-based rider Jenny Tinmouth will be the only woman to race in the series in 2015, joining fellow riders Jason O'Halloran and Dan Linfoot on the three-strong Honda Racing squad.

Tinmouth, who has achieved many firsts for women in motorsport, has competed in the British Superbike Championship since 2011 and is the first and only female to have ever ridden in the series - an accolade for which she was awarded a Guinness World Record. Having previously run her own private team, Tinmouth will now join the official Honda squad, racing in the prestigious premier class aboard the championship-winning Honda CBR1000RR Fireblade.

Tinmouth's racing career also includes numerous successes at the world famous Isle of Man Tourist Trophy (TT) road races, where she holds the current record as the fastest female around the notoriously difficult 37-mile course. Tinmouth broke the female lap record in her first year at the event and went on to break her own record the following year with an average lap speed of 119.9455 mph - for both she received further Guinness World Records.

In 2012, Tinmouth received The Women's International Film and Television Showcase, International Visionary Awards 'IT Girl' award for her commitment and dedication to her sport, siting her as an inspiration to women of all ages around the world. Tinmouth will begin her 2015 BSB campaign with Honda Racing at the first round of the 12-round championship at Donington Park from April 4-6, 2015.

"There'll be a focus on Jenny because she's a female racer, of course. After all, she's the first and only woman rider to compete in British Superbikes. But she's a proven competitor and current Isle of Man TT lap record holder. Jenny joins the team on merit and we are very pleased that we have the opportunity to work with her," said Nick Campolucci, Head of Motorcycles at Honda (UK).

"Honda has served up a number of firsts when it comes to broadening the representation of women in motorsport and Jenny is the latest female member of the Honda Racing family. She joins British motocross sensation Natalie Kane and Laia Sanz who achieved the highest ever placing in this year's Dakar Rally, by a female rider, finishing ninth overall in this year's race," Nick further added.

Jenny Tinmouth added, "I'm absolutely over the moon and cannot believe I'm riding for Honda Racing in the British Superbike Championship. The offer was totally unexpected. I went for a meeting with Nick (Campolucci) to discuss the season and had a few cheeky questions I wanted to ask about Honda helping me out with bikes, and when the offer came I couldn't believe what I was being asked. I went into the meeting thinking it would just be some help and came out as a full-time Honda rider. It's always been my ultimate dream to ride for the team and to have the opportunity this year is just amazing. I'm riding the Honda BSB bike for the first time during a team test in March and I can't wait."
Posted by NGOupdate at January 29, 2015